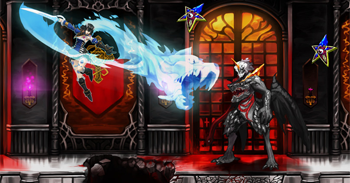 Wii U features revealed as campaign continues to rake in cash.

The Kickstarter campaign for Bloodstained: Ritual of the Night has surged past another of its stretch goals, ensuring development of a Wii U port after reaching $3 million in funding. New stretch goals have been added, offering an multiplayer mode and a version of the game for PlayStation Vita.

The newly confirmed port will be developed by Armature, and they have provided some information on their goals for the Wii U release. The game will make use of the tablet screen to supply a map (on which players will be able to make annotations) or for off-screen play. Support for the Wii U Pro Controller is also planned, along with Miiverse integration.

The first of the new stretch goals, which will unlock if the campaign reaches $3.25 million, will add an asynchronous multiplayer mode. Players will be able to "borrow" the character stats of a friend for a limited time, while awarding the friend a bonus. Players will also be able to view "ghost" footage of their friends, watching how their battles with the game's bosses play out, and have their game affected in minor ways based on how their friends play.

The announced PlayStation Vita version (which will also be developed by Armature) will go into production if the campaign reaches $3.5 million. The campaign for Bloodstained ends on June 11.