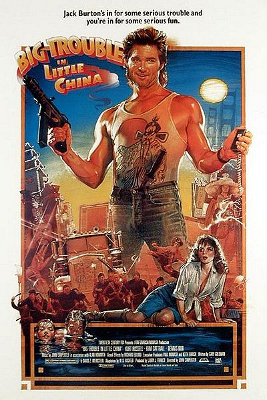 Kurt Russel and John Carpenter's masterpiece Big Trouble in Little China is reportedly getting a remake.

Big Trouble in Little China has the reputation of being the movie that made legendary filmmaker John Carpenter (Halloween, Escape From New York) so disillusioned with the industry, he stopped making Hollywood movies. Despite its massive commercial failure, the film went on to become a cult classic, and now, Hollywood is finally looking to cash in on that with a remake staring everyone's favorite pro-wrestler-cum-actor Dwayne "The Rock" Johnson.

The Hollywood Reporter and Variety are both reporting that Johnson is in late-stage negotiations to star in the movie, most likely filling Kurt Russell's old shoes as trucker-cum-sorcerer-slayer Jack Burton.

The film, which is being produced by 20th Century Fox, has Ashley Miller and Zack Stentz at its helm - the good folks behind the sci-fi hits Thor and X-Men: First Class.

For a quick refresher, Big Trouble in Little China follows Russel's Burton as he stumbles into a generations-old battle between the forces of good and the 2,000-year old evil sorcerer: Lo Pan. With a strong comedic focus, Big Trouble in Little China broke a lot of 80's action movie stereotypes by having a main "hero" who wasn't completely infallible and invincible. Jack Burton was just a regular guy in the wrong place at the wrong time.

What do you guys think of this? While I am a big fan of The Rock and his work, Big Trouble in Little China is just one of those movies that you don't mess with.