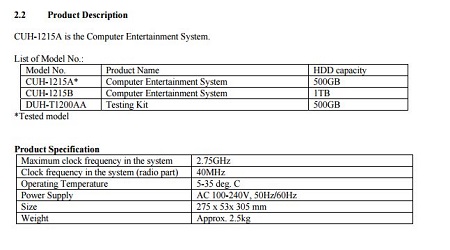 Documents released by the FCC have revealed that Sony could be working on two new versions of the PS4.

Sony may be prepping some new PlayStation 4 models for gamers who like their hard drives big. That, at least, is the indication of a pair of certification documents recently made public by the FCC. In the documents, the organization confirmed that Sony has registered a pair of new "Computer Entertainment Systems" with the model numbers CUH-1215A and CUH-1215B. While the 15a was listed as only having an HDD capacity of 500GB, the 15b will apparently have an impressive "1TB" HDD. A pair of labels for these model numbers were also released by the FCC, complete with PlayStation 4 branding.

While Sony has yet to confirm if or when it will actually be bringing these new versions of the PS4 to retailers, the company, in a request filed to the FCC this past April, asked that it delay revealing details about the aforementioned "equipment description[s]" to the public in order to avoid giving its competitors "an unfair advantage in the market." In other words, it didn't want Microsoft catching wind and then quickly countering or beating Sony to the punch with a 1TB XBox One.

As exciting as a 1TB hard drive could be for some gamers, the biggest question on our minds is what the company has in mind for the new 500GB version of the console. The PS4, as it exists on the market right now, already has a standard 500GB hard drive. We'll have to wait and see, but it's possible that the new 15a model could just be a more cost-effective redesign that Sony could potentially sell at a cheaper price point. We've reached out to Sony to see if you can procure any additional comments.