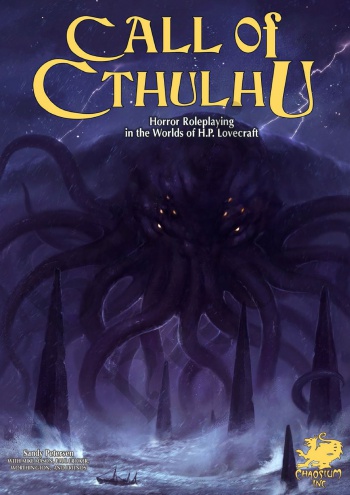 In the midst of internal strife and missing Call of Cthulhu backer rewards, Chaosium's Greg Stafford and Sandy Petersen have returned to lead the company.

If you want to talk about the biggest tabletop roleplaying companies in the business, Chaosium Games is always near the top of the list. Best known for the massively influential Call of Cthulhu, Chaosium remains one of the oldest RPG publishers in operation, despite Kickstarter delays, dropped licenses, and various internal problems. It's almost enough to make one long for the good old days - which may be returning more literally than you think. It turns out Chaosium founder Greg Stafford has returned to the company as President, while Call of Cthulhu designer Sandy Petersen is VP on the Board of Directors.

"Chaosium is part of my legacy," Stafford said in a statement. "My intent is to restore it to its rightful place in the world of gaming. Something we can all take pride in, and something that fans will look forward to.Where 'what's next?' is answered with 'I can't wait'."

All told, this is a huge shake-up for Chaosium, restoring its old guard to key leadership positions. Outside of the changes mentioned above, Sandy Petersen confirmed that Charlie Krank was no longer President of Chaosium, while writer Ben Monroe would step up to assist Stafford's management of physical facilities.

According to the announcement, Chaosium's main priorities include completing the still-absent Horror on the Orient Express and Call of Cthulhu 7th edition backer rewards. From there, Stafford hopes to get back to "regularly making awesome new games".

Sure, Stafford and Petersen's return isn't as dramatic as the Great Cthulhu's inevitable rise - but if you ask most tabletop fans, it feels pretty damn close. "Stafford fhtagn", indeed.