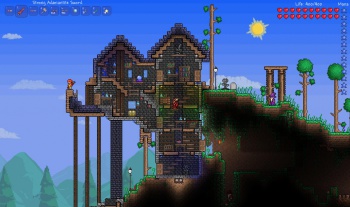 Nintendo fans will finally get to see what all this Terraria fuss is about.

Re-logic's sandbox Minecraft-alike Terraria, initially released back in 2010 for PC, has since come out on the PS3, Xbox 360, and PS Vita. There's even a Windows Phone and Kindle version... But, Nintendo gamers have been left high and dry, until now, that is. Lead developer Whitney Baird recently announced on the official forums that Terraria is indeed making its way to the 3DS and Wii U.

That was pretty much all the info she game us, stopping short of announcing any sort of release window or pricing information. Currently, the PC version of Terraria retails for $10, and the PS Vita version sits at $14.99, so you can probably expect the 3DS and Wii U editions to be somewhere around those prices.

This is a big change from a year ago, when 505 Games - the guys responsible for the console ports of Terraria - claimed to have no plans for a Wii U version.

Terraria, with it's precision-based mining, building, and inventory management, seems like it would be a perfect fit for the touch-screen displays of the 3DS and the Wii U gamepad.

In recent Terraria news, we heard that Re-Logic was preparing a massive free content patch set to release at the end of this month - perhaps to co-incide with the release of the Nintendo versions?