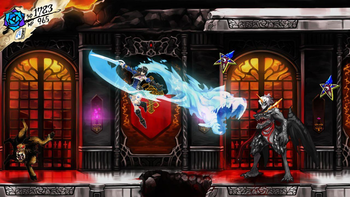 Koji Igarashi, who produced more than a dozen Castlevania titles and worked as assistant director for the iconic Castlevania: Symphony of the Night, launched the fundraiser for new title Bloodstained: Ritual of the Night with an original goal of $500,000. The campaign closed at 11pm EDT, with a total of $5,545,991.

Igarashi, known to his fans as Iga, reports that additional support through Paypal was "over $208,778," bringing the total amount of funding received to more than $5.75 million.

Bloodstained met all of its stretch goals, including one quickly added at the last moment earlier today. The campaign also became the most funded video game on Kickstarter this week, and closed out as the eighth most funded Kickstarter campaign of all time. It even beat out Reading Rainbow.

Iga's goal was to create a game "built on some of the classic gaming principles my works are known for." The campaign stretch goals included Wii U and PlayStation Vita ports, three playable characters, orchestrated tracks, a prequel mini-game for PC, consoles, and handhelds, and an online challenge mode. Backers of a certain amount had the option between a digital copy of the game at $28 and a physical retail copy of the title at $60.

Iga teamed up with Fangamer, the American maker of game-geek memorabilia and merchandise for the Kickstarter rewards.

"The fan response has been exactly what we hoped and expected. Everyone at Fangamer grew up participating in and operating fan communities, so we knew where to set the bar, and the fans rose to every occasion," Fangamer CEO Reid Young told me earlier today. "What we weren't prepared for was the scale. A $2 million campaign was as much as any of us were holding our breath for, so it's almost an out-of-body experience to be bracing for a $5.5 million stretch goal."

"We knew Iga was well-respected for his contributions to the gaming industry, but the fans have been *bursting* out of the woodwork to embrace him. We're honored to have played our part. It couldn't be happening to a more deserving or trustworthy creator."

Castlevania: Symphony of the Night was the starting point for the Metroidvania video game sub-genre. In an implied promise to fans, Igarashi has dubbed Bloodstained an Igavania. Iga said that he's hopeful for a 2017 release.