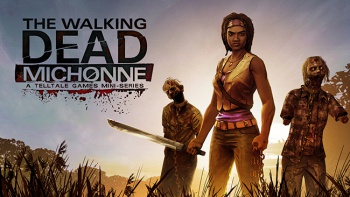 Telltale Games will return to The Walking Dead's roots with a series about Michonne's solo adventures.

Telltale Games' The Walking Dead is a fantastic series, but in terms of plot? It has very little to do with the comic book or TV show that inspired it. Outside of brief appearances from Glenn and Hershel it's pretty much a standalone zombie franchise - although that's something Telltale is about to change. Early today, the developer revealed the next chapter in its zombie apocalypse storyline: The Walking Dead: Michonne, a mini-series starring the familiar, sword-wielding warrior of the original.

The Walking Dead: Michonne is set within the comic book storyline - specifically between issues #126 and #139 - during the period where Michonne left Rick's group and struck out on her own. Over the course of three episodes, Telltale will answer why Michonne left her trusted zombie survival group and what finally brought her back a year later.

"In many ways, Michonne herself is a reflection of the world of The Walking Dead," series creator Robert Kirkman said. "She is brutal and cold on the outside, but deep beneath what is broken, she remains hopeful, trying to claw her way out of the darkness that surrounds her. In our effort to bring the world of the comic and the world of the Telltale series closer together, there is no greater character than Michonne to help bridge that gap."

The Walking Dead: Michonne seems like it will take the same approach as the original's 400 Days DLC - you'll need at least the first episode of Season 2 to play it. We'll provide more details as they're available, but I for one am very excited to see where this new adventure takes us.