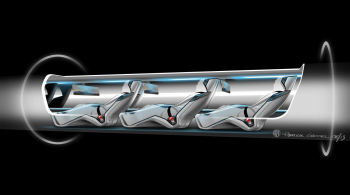 Elon Musk and his company SpaceX are calling on students to submit designs for a passenger vehicle that can travel at supersonic speeds. The Hyperloop edges ever closer to reality.

Elon Musk and SpaceX have formally opened a competition, specifically targeted at university students, to design passenger vehicles for the transport system known as the Hyperloop. Teams that can build their own prototype will get to test it on the world's first Hyperloop test track, under construction near SpaceX's headquarters in Hawthorne, California.

Prizes for the competition, beyond bragging rights, have not been announced. If this contest is anything like current X Prize contests, however, millions of dollars may be on the line.

Elon Musk, also of Tesla Motors, first brought up the idea of the Hyperloop in 2013. It will be, essentially, a tube in which people transit from one urban hub to another in self-contained capsules, at extremely high speeds. If this sounds like something out of Futurama, Musk himself describes it in terms very familiar to fans of science fiction, saying it will transport people at "warp speed," and that it is a "cross between a Concorde [super-sonic jet], a railgun, and an air hockey table."

How does stepping into a railgun and being fired from Los Angeles to San Francisco sound to you? More importantly, though - can you design the bullet?