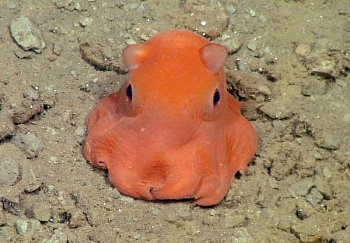 A recently described species of octopus needs a name, and it's so cute we might just call it Adorabilis.

What do you call an octopus that's got stubby little tentacles, is bright pink, super squishy, and looks like a Pac-Man ghost? Why not Adorabilis, suggests its describer, Stephanie Bush, at Monterey Bay Aquarium Research Institute.

"As someone that's describing this species, you get to pick what the specific name is..." says Bush, a doctoral student with MBARI. "One of the thoughts I had was making it Opisthoteuthis Adorabilis. Because they are just... yeah. They're really cute."

We have to agree with her on that. Have a look at the little critter in Science Friday's video below:

The name is hardly set in stone, but given the popularity of Bush's suggestion, it seems likely to stick.

Oddly enough, these puppy-eyed octopi (octopodes?) are "abyssal," meaning they reside in the deep sea, on the ocean floor. It thrives in darkness, cold, and high-pressure waters, where it hunts. Its diet consists of small crustaceans, worms, and anything else it can adorably wrestle from the ocean floor. Because its hunting process has not yet been fully described, we are content to believe that it is a loveable, Disney-esque process that makes everyone happy, and is not nightmarish or traumatizing at all.

Adorabilis is also a close cousin of Opisthoteuthis California, or Flapjack octopus, that some readers may know best as the species of Finding Nemo character, Pearl. According to Adam Summers, a scientific consultant on that film, Pearl (and probably Adorabilis, too) "...would be pink mush since... they only reside at great depths." In other words, they won't make great pets.

Though no tangible announcement has been made from movie studios, we can safely assume an "Adorabilis Versus Crocopuppy: Tentickles of Fate" film is in the works, and we will bring you more news on this eventual award-winner as it emerges.

Cute Otters to Help You Relax After PAX Encaen 18 Comments