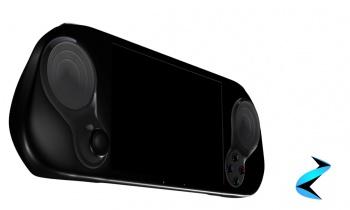 Last year the SteamBoy team offered a tantalizing prospect - a Steam Machine handheld that could access your library on the go. Announced by a third-party team for a 2015 release, the concept left us salivating, but we've heard little to suggest the project was still underway. Perhaps the whole thing was vaporware or a simple case of a dev being overly optimistic. Regardless, new press releases suggest the SteamBoy is moving forward after a fashion. The handheld has been renamed SMACH Zero, its release date is 2016, and - most importantly - the technical specs have been revealed.

If it works as advertised, the SMACH Zero handheld would be a mobile platform which fully supports SteamOS. Over 1,000 games would be playable at launch, including the SteamOS versions of Half-Life 2, Civilization V, Dota 2, Tropico 5, BioShock Infinite, and Cities: Skylines. It's an impressive claim, but technically not an impossible one - after all, the SMACH Zero uses a Steam Controller scheme similar to the one that should emulate mouse and keyboard controls.

Of course, all this is dependent on the hardware itself. Here are the SMACH Zero's specs:

In other words, this isn't top-of-the-line hardware but is perfectly reasonable for the games mentioned above - just as expected for a handheld system. "SteamBoy won't be as powerful as other announced Steam Machines in the same way [the] Nintendo 3DS or PS Vita performance is not comparable to Wii U or PlayStation 4," a representative told The Escapist last year. "However, it will be possible to play the majority of current games in Steam."

The press release adds that pricing and availability options will be revealed during this August's Gamescom. Of course it would be great to see the device in action, but it's not clear that SMACH Zero will actually be at the convention. We've reached out to the SMACH Zero team for comment and will update this post with any additional information.