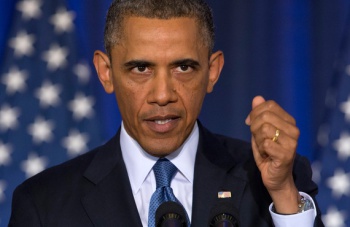 In a report released on Monday, the White House shows the economic and health benefits of taking action against climate change. Changes made now, says the report, could save lives.

The Obama Administration has released a report on Monday that takes a hard look at climate change, and whether the cost would be higher to take or action or do nothing in the face of global warming. Their findings: decisions and policy changes today will save not only lives, but billions of dollars by the end of the century.

The report, titled Climate Change in the United States: Benefits of Global Action, compares two possible scenarios: one in which the global community dramatically adjusts itself to the ongoing climate disaster, and one in which no action is taken whatsoever. From there, it extrapolates the differences in health, economy, and ecosystem impacts under the two different futures.

Says Gina McCarthy, Administrator of the Environmental Protection Agency, "The report finds that we can save tens of thousands of American lives, and hundreds of billions of dollars, annually in the United States by the end of this century, and the sooner we act, the better off America and future generations of Americans will be."

More from the Escapist: The Sad Truth About Global Warming

While the Obama White House is vague on its approval of the theory of man-made climate change, they still suggest that adaptations in our ways of life and business will have immense impact. Lowering greenhouse gas emissions across the board will certainly slow the rate of change, says the report - and the responsibility will fall on citizens, businesses, and governments alike.

The report, in development for months, comes on the heels of Pope Francis issuing an encyclical on climate change. The Catholic religious leader demanded immediate action, saying it is now our spiritual duty to protect the environment.

Meanwhile, a research paper published in The Lancet examined the potential "catastrophic risk" that climate change poses to global health.

Says the Lancet paper, some of the health risks are obvious - hurricanes, tornadoes, blizzards, heat waves and other weather extremes are already occurring at a frightening frequency across the globe, a rate which is bound to increase. More insidious threats include asthma, allergies, and various respiratory ailments and diseases caused by air pollution, not to mention droughts leading to food shortages. A collapse of ecosystems could put various types of disease carriers in touch with humans, causing contagion on a broad scale.

See more: The Escapist on the environment.

"Global warming" is what many grew up calling the phenomenon, but it has become increasingly clear over the past decades that "climate change" is a more appropriate term. While the Earth as a whole is warming gradually, havoc is being wrought with individual climes. Some regions experience deeper, colder winters than ever before; others have uncharacteristic heat spikes. Sea levels are rising, threatening millions around the world, while unprecedented droughts ravage food supplies.

It is largely agreed now that an accumulation of greenhouse gases, among many other factors, has at the very least exacerbated the situation, if not triggered it. While any of the gases on their own can be produced naturally, it is also widely known that human influence puts them into our atmosphere at a far, far faster rate than nature normally could.