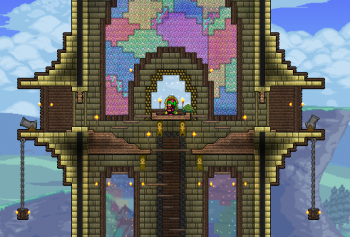 The day is finally here! That massive 1.3 patch we talked about for the PC version of Terraria has finally gone live - absolutely free of charge of course. Among many new items, features, and bug fixes, 1.3 completely streamlines the entire multiplayer process. It's now as simple as right clicking on a friend in Steam and choosing "join game" - gone are the days of port forwarding and IP sharing.

Additionally, if for some reason you've yet to pick up the game, there's a special 1.3 patch launch week discount right now, knocking 25% off the price.

To see all the stuff that has been added, be sure to check out the official changelog. Though, keep in mind that "Terraria is a game about exploring", and Re-logic says it has hidden quite a few surprises in there.

For now, the patch has only been officially announced for the PC version of the game - it's unclear when (or if) it will make its way to Terraria's various console and handheld versions.

To download the patch, simply boot up Steam and it should automatically start. Enjoy!