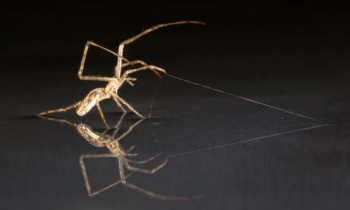 A new study reveals spiders to be adept seafarers. Several species of the arachnid use their legs to catch the wind and their silk as an anchor, giving them sailboat-like control while skimming water.

Even Charles Darwin had to wonder about the spiders floating onto the deck of the HMS Beagle.

Darwin wasn't surprised at the existence of floating spiders, per se. Aerial dispersal among arachnids - spiders using their silk as parasails, or balloons - had been noted for some time. What Darwin wondered was what the spiders that didn't make it to the deck of the Beagle did. After all, his ship was out at sea; the spiders that caught the breeze were depending on luck to land somewhere liveable. No doubt thousands of spiders were left adrift for each one that managed to find land.

Morito Hayashi, a researcher at London's Natural History Museum, puts Darwin's nagging question thus: "Given that spiders are terrestrial, and that they do not have control over where they will travel when ballooning, how could evolution allow such risky behavior to be maintained?"

As Hayashi and fellow scientists discovered, spiders know how to sail. Their research is presented in a study in Evolutionary Biology.

Darwin was correct in his assumption: most spiders that take flight end up in the water. Once there, the study says, spiders will lift their legs in order to catch the wind, guiding them in a preferred direction not at all unlike a sailboat. When they wanted to slow down or change direction, they used an anchor - a length of silk that dragged in the water behind them.

Video of scientists being mean to spiders:

So far, the seafaring behavior has only been noted in species that also "take flight," lending credence to the belief that sailing is a backup instinct for when the wind drops a spider far from land.

More from the Escapist on evolution.

Why do spiders fly in the first place, though, if they have so little control over it? As awesome as it would be to have a fleet of blimp-bound spiders chasing down prey, the behavior has little to do with hunting - at least not directly. The eight-legged critters use the wind to cross vast distances quickly, allowing them to claim new feeding grounds, find places to hide their egg sacks, or escape from inhospitable territory.

By "vast distances," we don't necessarily mean relatively vast - a spider and its balloon can hop from island to island, and sometimes from continent to continent, using high-altitude air currents. Spiders are among the first animals to arrive at new volcanic islands, landing soon after winged insects and birds.

Apologies to any readers scared of spiders. There is almost no evidence to suggest that a vast ocean-bound spider armada exists, let alone that they know where you live.