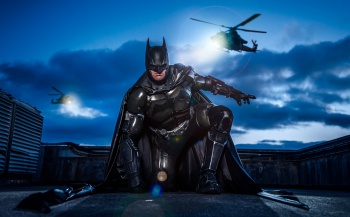 Owner of Order 66 Creatures and Effects Julian Checkley has been contacted by Guinness World Records Gamers' Edition regarding this sensational 3D printed batsuit.

Update: Julian Checkley has been contacted by a representative of Guinness, who has requested that the specific categories the batsuit is being considered for be removed from the article. The original story has been updated to reflect these changes.

Original Story: The Guinness World Records Gamers' Edition has reached out to Order 66 owner Julian Checkley, whose batsuit is being considered for several acknowledgements in an upcoming edition. The suit features video screens in the gauntlets, folding batarangs, a grapnel gun, and even a working fireball shooter, with lasers that project the bat signal being added.

Checkley founded Order 66, a "tiny little setup" in Galway, on the West Coast of Ireland, after spending 20 years working in the film and TV industry in the U.K.

"Recently we stepped away from our traditional method of creating costumes (which would be a rather lengthy and intricate process of sculpting, casting, and rendering) and ventured into the realm of 3D printing," Checkley said. As his facility does not yet have the means to 3D print the parts, they outsourced to Gauntlet FX in Canada.

The chest plate and the harder parts of the design were 3D printed, and the suit was hand-painted using airbrushing techniques. While creating costumes like this, to this standard, would "cost North of 8000 euro including all the gadgets," 3D printing has cut the total production time in half while still maintaining an accurate design.

The elaborate costume was crafted in the style of Batman: Arkham Origins, with the intention of releasing alongside Batman: Arkham Knight. "We wanted to ride the PR wave a little bit," Checkley admitted. "But this was quite unprecedented." Checkley admits that he is "quite humbled" by the response to the costume. Checkley was also the one lucky enough to wear the costume, which brought his 6-foot-6 frame to an even more imposing nearly 7 feet tall. The biggest challenge at that point? Mastering the scowl.

We also asked Checkley to share his "top picks" of his work over the years. While the Batsuit was the first to incorporate a functional fireball shooter, the others are no less impressive in design, featuring Darth Malgus, the Sith Stalker, Darth Vader, Bane, and of course, an 8'4" Wookiee.

You can also see Batman, Tarfful, and Darth Malgus in action below.