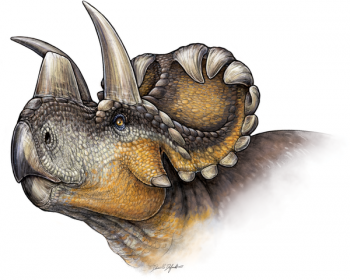 A newly detailed relative of Triceratops has been discovered in Alberta, Canada. The horned dinosaur is to be named Wendiceratops, after legendary fossil hunter Wendy Sloboda.

The iconic Triceratops welcomed a new addition to its family of horned dinosaurs today with the official unveiling of Wendiceratops Pinhornensis, named for prolific Canadian fossil hunter Wendy Sloboda.

The find, which included three adults and one juvenile skeleton, was made in southern Alberta, Canada, near the border of Montana. Over two hundred bones were collected in the area known as the Oldman Formation.

Though Sloboda did not discover these fossils herself, she is credited with discovering the Oldman Formation.

Were dinosaurs warm-blooded or cold-blooded?

Wendiceratops, like its famous cousin, head three prominent facial horns, and was a low-set, quadrupedal herbivore and herd animal. The physical differences between the two species are easy to spot, however. At 6 metres in length, "Wendy" was just two-thirds the size of the larger Triceratops. Says study co-author David Evans, "The wide frill of Wendiceratops is ringed by numerous curled horns, the nose had a large, upright horn, and it's likely there were horns over the eyes, too. Its front-most horn was blunted, rather than long and dangerous, and thus was probably not used for fighting and defense.

Check out the gallery below to see some of the bones collected in the dig:

About Sloboda, Evans had this to say: "Wendy... has a sixth sense for discovering important fossils. She is easily one of the very best dinosaur hunters in the world."

This is not the first extinct animal Sloboda has had named after herself; that would be meat-eating bird Barrosopus Slobodai.

Who needs to genetically engineer new dinosaurs, when cool ones keep popping up all the time?