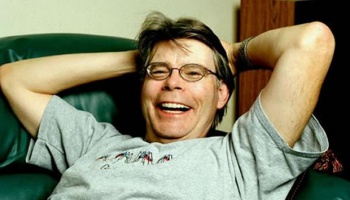 In 1998, a print-and-play board game version of Stephen King's novel The Shining was developed and released. It is an odd and eerie game that the author himself helped design, and you can download it for free today!

All play and no work?

Stanley Kubrick's movie adaptation of Stephen King's 1977 novel, The Shining, did not sit well with the author. This is no secret; in interviews, the prolific horror writer is quoted as saying, "parts of the film are chilling, charged with a relentless claustrophobic terror... but others fall flat." Crucially, he says, "A visceral skeptic such as Kubrick just couldn't grasp the sheer inhuman terror of the Overlook Hotel."

So, it seems, King took it upon himself to co-create yet another version of his book, to stand apart from the Kubrick's film. Only this iteration came in the form of a print-and-play board game.

Download the rules and game board in the 'files' section at BoardGameGeek.

In the game itself, two players face off against one another in an asymmetrical battle of wits. One player controls the luckless Torrance family of Jack, Danny and Wendy - while the other portrays the evil and sentient Overlook Hotel itself. It should be said from the beginning, the Torrance family is not going to have a pleasant vacation.

The game includes many elements of the novel that the iconic 1980 film leaves out. For example, the Hotel player also has control over the animated topiaries of the hedge garden, which never come to life in the movie.

It should be noted that sources variously describe King as co-designer, or playtester, or both - but one commenter on the 'OpenCulture' blog suggests that he was neither, and had little to do with the game other than approving it and providing the inspiration.

Still, this is a fascinating little piece of cardboard (or whatever you happen to print it on). Played on two boards, it might seem from a distance like a war-game, with each side deploying and moving units, attacking each other (the Humans, Phantoms, and Hedge Animals all have attack and defense values). That doesn't mean this will satisfy people looking to replace their Warhammer minis- at the same time, the Hotel player is able to deploy nefarious and manipulative tricks, using hidden information and false tells to confuse and eventually doom the Torrance family.

Personally, it brings to mind an earlier, simpler version of Fantasy Flight's Mansions of Madness.

Has anyone else here played the game, or would you? What did you think of it?

And am I the only one imagining Kubrick and King sitting across from each other, the great director leaping up, flipping the table, and shouting, "!%#* topiary rush is OP! I never put them in my movie!"