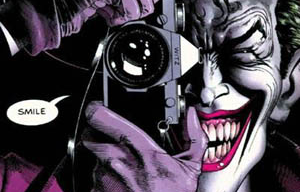 The graphic novel The Killing Joke will be appearing in 2016 as an animated film.

In a forum post Friday, DC Comics revealed the announcement of an animated movie adaptation of the 1988 graphic novel The Killing Joke. The post followed a Comic-Con San Diego reveal during the Justice League: Gods and Monsters panel.

"The animated adaptation of Batman: The Killing Joke is executive produced by Bruce Timm and will retell this classic tale in an exciting new way," the post reads. "It'll also feature an original 15-minute prologue that helps set up the story, giving even longtime fans of the story something new to look forward to."

Without revealing too much information for those of you unfamiliar with the story, many consider The Killing Joke to be the definitive Joker story, which also sets the foundation for the birth of Oracle. The graphic novel has received its fair share of both praise and criticism since its release.

The decision to create the animated movie now was made in order to coincide with Joker's 75th anniversary.