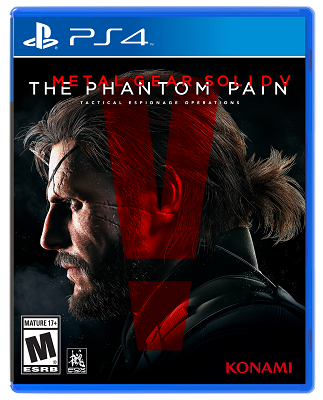 The words "A Hideo Kojima Game" have been deleted from Metal Gear Solid V: The Phantom Pain's final box art.

Metal Gear is Hideo Kojima's baby. There are other people involved in it, of course, and we would never suggest snubbing the hundreds of talented people that have contributed to series since its inception. That said, Kojima is still the franchise's undeniable visionary; the man who guides it from each convoluted chapter to the next. You can perhaps understand, in turn, why some have taken note of the fact that Konami has removed his name from the final box art for Metal Gear Solid V: The Phantom Pain.

Whereas previous renditions of the game's art had "A Hideo Kojima Game" at the top of the box, gamers at NeoGAF recently noticed that new versions of the box put out by Konami have unceremoniously removed Kojima's name. This, of course, mirrors previous actions taken by the publisher erasing Kojima from other content on official websites and promotional materials pertaining to the famous stealth franchise.

While Konami doing this is disappointing, it's not likely that many gamers will be surprised by the publisher's actions. Konami, this year, has been at the center of a lot of gaming turmoil, much of which has centered around its treatment of Kojima and his projects. In addition to cancelling Kojima's Silent Hills, the company infamously pulled his teaser game P.T. from the PlayStation Network, essentially erasing it from existence. Rumors that Kojima Productions will be disbanding after The Phantom Pain's release were also recently confirmed by Akio Otsuka, Solid Snake's longtime voice actor in Japan. What we're trying to say, of course, is that things could be better between Konami and Kojima.