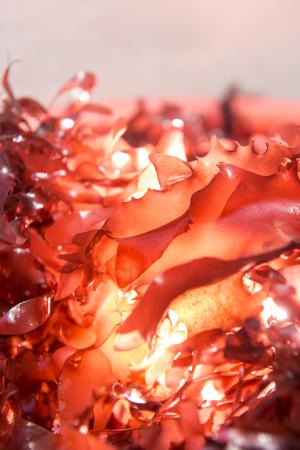 Researchers at Oregon State University have patented a strain of seaweed that comes packed with vital minerals and nutrients - and tastes just like bacon.

It is not everyday that the words "bacon," "seaweed," and "healthy living" show up in the same scientific announcement, but researchers at Oregon State University's Hatfield Marine Science Center are determined to break the mold. They have created a new strain of dulse - a red marine algae - that comes packed with vitamins and tastes just like bacon.

Chris Langdon, a professor in the Department of Fisheries and Wildlife at OSU, led the project. Sayi Langdon, "When you fry it, which I have done, it tastes like bacon, not seaweed. And it's a pretty strong bacon flavor."

"The original goal was to create a super-food for abalone, because high-quality abalone is treasured, especially in Asia," Langdon added. Abalone is a sea snail prized as a delicacy in many cultures. The project was extremely successful, and this got the team thinking - can we do the same for humans?

Dulse grows naturally along the Pacific and Atlantic coasts. It is harvested, dried and powdered, and sells for up to $90 per pound as a cooking ingredient or nutritional supplement. "In Europe, they add the powder to smoothies, or add flakes onto food," Langdon said. "There hasn't been a lot of interest in using it in a fresh form." Until now, that is.

The project has sparked interest in Oregon, receiving a grant from the Oregon Department of Agriculture. Business entrepreneurs and chefs are taking the idea and running with it, developing products featuring the stuff - which resembles translucent, red lettuce (see above) - and creating speciality dishes.

There are other hopes for the new crop, beyond strange new dishes. The meat industry is an objectively wasteful one, wreaking environmental havoc on a large scale. A breed of nutrient-rich, efficiently-grown algae that can simulate a cherished meat flavor could, though it may seem unappetizing, have a positive impact on the planet's health.

Bacon seems to have become the culinary equivalent of zombies in video games - it's the punchline to every joke; it's the signature ingredient in every dish. That being said, I'd happily try a bite of bacon algae! Any adventurous eaters among The Escapist's community want to try it with me?