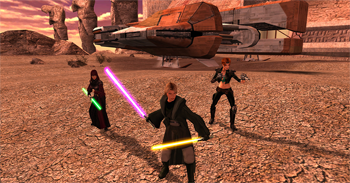 More than a decade following its original release, Star Wars Knights of the Old Republic II: The Sith Lords has been released for the first time for Mac and Linux users.

Available today on Steam, the new releases are published by Aspyr and come with a variety of new features which have also been implemented in the previously available PC version. The game now includes native widescreen support for monitors at up to a 5K resolution and full controller support. Gameplay achievements and cloud saves have been added, as well.

In addition, KOTOR II now has Steam Workshop support, making it that much easier to install "The Sith Lords Restored Content Mod". Considered by many fans to be the definitive experience, the mod restores a significant quantity of content developer Obsidian cut from the game in order to meet its late 2004 release date on Xbox. While it was never particularly difficult to install before, reducing the process down to a couple of clicks is quite welcome.