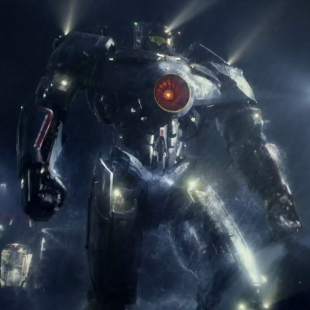 While film-goers in North America largely ignored it, Pacific Rim was easily one of the best action films of 2013 and remains one of the coolest things non-Marvel things the film industry has put out in a good long time. The film's fan were thrilled, in turn, when its overseas success prompted Legendary Pictures to greenlight a sequel, currently slated to release in April 2017. That being the case, recent reports have stated the film now has a title and a date to start shooting.

According to said reports, Pacific Rim 2 will be subtitled "Maelstrom." Shooting for the film, in turn, is apparently slated to begin this coming November and will take place at Pinewood Toronto Studios. Speaking recently about the sequel, director Guillermo del Toro indicated that it will be set a few years after the first movie and will focus primarily on its city-stomping baddies the Kaiju. He's also promised that it will be "very different" from its predecessor.

Just speaking personally, this news is more than a little exciting to me. I've been a fan of giant robots blowing things up since Toonami first introduced me to Gundam back in the early 2000s. And while Pacific Rim wasn't perfect, it was still about as awesome a giant-robots-smashing-stuff flick as one could ever hope for Hollywood to produce. Seriously, just watch this scene and tell me this movie isn't amazing. It even makes that overused Inception "waaaaaah" noise seem cool again! That, my friends, is a feat all on its own.