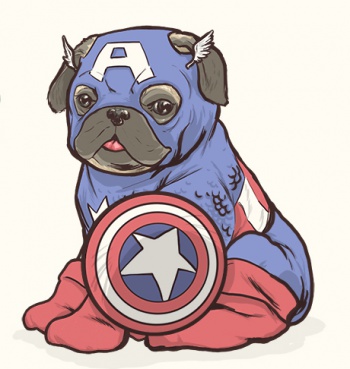 If you're like me, you probably agree two things are making the world a better place: Superheroes and puppies. Naturally each meets very specific human needs (destroying evil and wonderfully scrunchy faces), but why shouldn't we go ahead and combine the two? Apparently artist Josh Lynch feels the same way, but he went a step farther by designing adorable Marvel fan art around the concept.

Lynch's images cover a wide range of Marvel Comics characters, hero and villain alike. And between the anxious Spider-Pug and the worthy Golden Retriever who picked up Thor's hammer, there's lots to enjoy here. You've got a well-armed Punisher pup, the doberman Ghost Rider, and even a Galactus which doomed planets would probably welcome with open arms. Although I have to admit my personal favorite is the Captain America pug, completely unconcerned about threats posed by a feline Red Skull. There's quite a bit of overlap between dog breeds - the Hulk and Thanos are both bulldogs for example - but they're all so charming that probably won't bother you much at all.

To conclude, I propose that when each Avenger's film contract is up, the actor isn't just replaced: The character is transformed into a puppy who continues defending the universe forever. Who's with me?