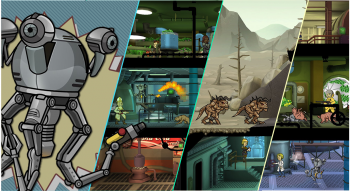 Fallout Shelter is finally making its way to Android in August.

If you're like me and own all Android devices, you have no doubt felt the pain of not being able to join in on the Fallout Shelter joy with other Fallout enthusiasts. At QuakeCon today Todd Howard, game director for Fallout 4, revealed that the mobile sensation will be hitting Android devices next month. In addition, both Android and iOS players alike will be getting new updates.

"Earlier today at QuakeCon, Todd Howard revealed to an enthusiastic crowd that Fallout Shelter will be available for FREE on Google Play for Android devices on August 13th," a blog post recap says. "Whether you're playing on Android or on iOS, Fallout Shelter will feature new game updates, including Mr. Handy as an all new premium reward. Have him collect resources inside your Vault, send him into the wasteland to collect loot, and defend your Vault from creatures and disasters, including all new Deathclaw invasions and Molerat infestations."

The mobile title was revealed at Bethesda's E3 2015 conference, serving as both a promotional tool for the upcoming Fallout 4 and a way to hold over eager fans of the franchise.

Despite being free to play with optional microtransactions and an iOS exclusive release, Fallout Shelter managed to bring in over $5 million within the first two week of its release.