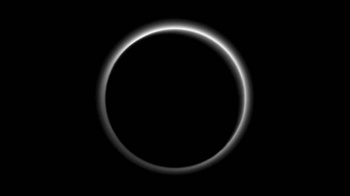 As New Horizons sails by Pluto in its fly-by mission, it turns around to take a stunning photo - one that reveals an unexpected atmosphere.

On Friday, NASA revealed New Horizons' latest, and maybe last, photo of Pluto. This time, we see its dark side.

Every photo taken so far of the dwarf planetoid has had the benefit of the sun's illumination. Astronomers were able to clearly make out fine details of Pluto's surface, not to mention its moons. And yet, this new angle of Pluto offers a tantalizing mystery in something we couldn't get a good look at before: its atmosphere.

"My jaw was on the ground when I saw this first image of an alien atmosphere in the Kuiper Belt," says Alan Stern, private investigator principal investigator for New Horizons. The Kuiper belt is the region at the edge of our solar system that Pluto inhabits, and includes many other objects present from the very beginning. "It reminds us that exploration brings us more than just incredible discoveries -- it brings incredible beauty."

Speaking of, have a look at a gallery of recent Pluto images compiled a week ago:

Oddly enough, scientists have estimated that Pluto would be too warm for the "haze" we can see forming at its current height. It was assumed Pluto would have an atmosphere of some kind, but it wouldn't reach so high above the planetoid's surface.

What's next for New Horizons? Well, NASA hopes it receives funding to investigate some other Kuiper Belt objects. There are two particular masses within range that are extremely tempting, as their age and distance can give us incredible clues to what was happening as the solar system formed, more than four billion years ago. Earth was just a sparkle in the sun's corona when these asteroids and comets were made.

So that means that, except for NASA's uploads over the next few months, it could be the last we hear from New Horizons until 2018. And beyond that? The edge of the heliosphere, where our sun's direct influence fades. It should get there in about twenty years.

Fun fact: Voyager 1, which carries the golden disk as a message to alien life and was launched in 1977, reached the heliosphere in 2013. It might seem like New Horizons is poised to outpace Voyager, but thanks to multiple gravity assists the latter received that the former missed out on, New Horizons will never be able to "catch up" with our little peace probe.