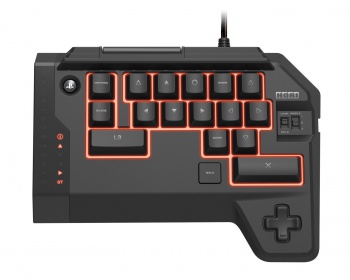 When I switched from playing Call of Duty on a PC to my PS3, there was a significant learning curve involved. Controllers and consoles are certainly convenient, but FPS aiming is simply more precise when using a mouse and keyboard. That's why there's a market to adapt the control scheme to consoles - the latest of which is Hori's Tactical Assault Commander 4, an upgraded version of the TAC3 intended for PS4.

Unlike your typical keyboard, the TAC4 isn't designed to recreate all PC functions. It's a gaming-specific controller which maps DualShock 4 buttons to its 18 keys while letting you swap between multiple profiles. Outside of dedicated keys like the PlayStation and options button, the D-Pad is reconfigured to WASD positions, with Triangle and Circle located at the Q and E. Meanwhile the mouse covers the triggers, along with the Square button for quick reloading.

There's a few potential downsides to the TAC4. First of all, it's a wired controller, which might be limiting in your living room setup. Hori also doesn't include a lap board making it easier to play from a couch. There's also a question of whether it will be available in North America - Hori's listing is currently on Amazon.co.uk, so it's not clear whether a Western retail release is in the cards.

That being said, it certainly has potential, along with a license from Sony that's hopefully been put to good use. We'll find out when the TAC4 releases on Oct. 9 2015, just in time for a new Call of Duty season.