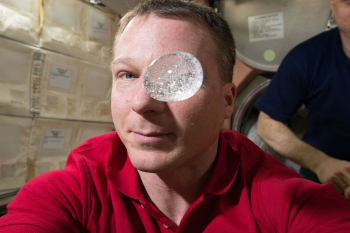 On Monday, NASA released the first videos taken on board the International Space Station with its new RED Epic Dragon Camera, which can record video of up to 6k quality.

For the first time ever, people on Earth can see what life is like in orbit in high definition video. In a January resupply, the ISS acquired a RED Epic Dragon Camera, which they have been using to record both experiments and slices of life.

With the past two weeks being all Pluto, all the time, maybe NASA feels it's time to show us something a bit closer to home.

The RED camera is the same used to record the Hobbit trilogy, among other recent media. Smaug isn't impressed.

In one video, astronaut Terry Virts inserts an effervescent antacid tablet into a floating globule of water. In zero gravity, the water forms shifting sphere in space, and it slowly turns opaque with bubbly activity. Some droplets that burst from the sphere orbit it briefly before glomming back on.

Canadian astronaut Chris Hadfield recorded a similar experiment during his tenure on board. What can we say - water in zero-g is pretty amazing.

In the next video, Virts, who was Commander for expedition 43 from March to June, shows us how to satisfy your food cravings on board the station. Taking what looks like a taco shell and stuffing it with freeze-dried ground beef, along with mustard, ketchup, mayo, and any other condiments they have up there, he presents to us the "space cheeseburger."

I can't say the burger looks very appealing. Has anyone here tried astronaut ice cream? Does it really taste like Buzz Aldrin?