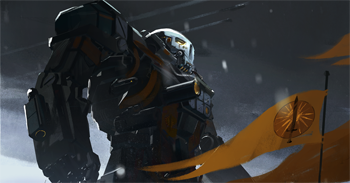 Jordan Weisman returning to the well once more.

Harebrained Schemes, developer behind Shadowrun Returns, Shadowrun: Dragonfall, and the forthcoming Shadowrun: Hong Kong has announced their intent to launch a Kickstarter campaign to develop a game based on a different classic FASA franchise. At GenCon in Indianapolis this week, the studio revealed they will seek funding for a new BattleTech.

Few details have been announced regarding the project at this stage. The studio has confirmed that the game will feature turn-based combat (the first in the franchise to do so in more than twenty years), and will have an open-ended, "Mercenary-style," campaign.

Co-created by Harebrained Schemes' founder Jordan Weisman, BattleTech first saw life on the tabletop in 1984 (as "BattleDroids") and has spawned numerous spin-off series (including MechWarrior, MechAssault, and MechCommander), more than a hundred novels, and even a short-lived animated series.

BattleTech will be the fourth Kickstarter campaign from Harebrained Schemes. Their 2012 funding drive for Shadowrun Returns amassed $1.8 million, resulting in the production of that game and its expansion (later released as a standalone title), Dragonfall. A second Shadowrun Kickstarter in January of this year also met with success and Harebrained will release the fruits of that labor, Shadowrun: Hong Kong, next month.