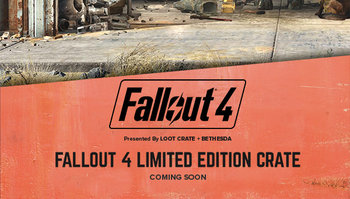 Bethesda and Loot Crate team up to offer a limited edition Fallout 4 crate.

Earlier this month, Fallout 4 snatched up the honors of Best of Show, Best PC Game and Best Role Playing Game for the Game Critics Awards for E3 2015. A Fallout 4 Pip-boy collector's edition was announced and quickly became one of the most sought after collector's editions of any video game in recent memory. It sold out quickly, and Bethesda's Marketing VP Pete Hines stated that no more could, or would, be created.

But fret not, fans of collectible things, for Bethesda announced today a partnership with Loot Crate to create limited edition Fallout 4 crates.

Nothing yet has been revealed as far as a release date or what items will be included in the Fallout 4 crate, which will be available in small quantities independent of the main Loot Crate subscription, although the items will likely be a combination of rare collectibles and attire. One thing is certain, however: they are likely to go fast. You can sign up for updates here

This is not the first time Loot Crate has been player 2 for a video game themed exclusive: the company previously teamed up with Nintendo for an amiibo subscription service.