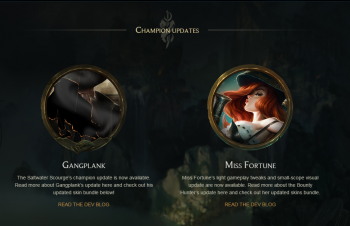 It looks like Miss Fortune has killed off Gangplank... permanently.

Well here's a new one. Fans of Riot Games' MOBA League of Legends are used to getting a steady stream of new champions added to the game, but this time Riot has flipped things around by seemingly removing a champion from the game... permanently.

The champion in question is none other than the pirate captain Gangplank, and his removal from the game arose as a part of a special in-game Bildgewater Event. Essentially, as part of the event's "story" long-standing Gangplank rival and bounty hunter Miss Fortune finally offs the saltwater scourge, which has resulted in the champion being removed from play in any game mode.

But is this a real "death" or a Dragonball Z death, where Gangplank will be back next week? At this point, we're not sure, and Riot isn't giving us too many hints.

"Champion death is unprecedented in League of Legends and we do not take it lightly." posted Riot in an F.A.Q. "We encourage all Gangplank fans to remain calm for a few days until we can fully assess the situation. At this time, we are not addressing refund requests for him or his skins but please know that over the next several days we'll do our best to make things right for everyone."

On the one hand, the "we do not take it lightly" comment suggests that he is gone for good, but on the other hand, the fact that Riot isn't giving out refunds yet may suggest he will return, at least in some form.

What do you guys think? Is Gangplank gone for good, or will Riot bring him back?