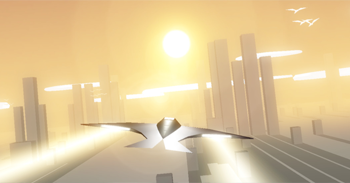 Race the Sun, an arcade-style racing game by indie developer Flipfly, has released on iOS and, to celebrate the occasion, they are offering the Steam version absolutely free. Don't waste time, though, as the offer expires tomorrow.

Race the Sun is a racing game which draws much of its inspiration from classic arcade racers with time limits and extensions. The player attempts to fly a solar-powered craft for as long as possible through procedurally generated stages that are replaced daily. As the title implies, the player is in a literal race against the sun, the setting of which represents the game's timer.

It's challenging, but accessible, and the design lends itself well to the "just one more try" reflex. If you have a Steam account, I would personally recommend logging in and adding it to your library while you have the chance.

In addition to the PC and new iOS versions, Race the Sun is also available on PlayStation 3, PlayStation 4, and PlayStation Vita.