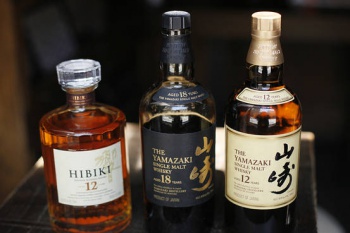 Japanese brewery Suntory is sending a batch of its whisky to the International Space Station with the next cargo rocket, in an experiment to see how low-Earth orbit affects its qualities.

In mid-August, a package of the Japanese brewery's award-winning whisky will be packed into a cargo rocket bound for the ISS. The brewery plans to have half the batch sent back after one year, with the remainder staying behind for at least two years, or more.

Why, you might ask? Well, in theory, a constant temperature and as little movement as possible are best when it comes to reducing harsh flavors in distilled beverages. The International Space Station, in a sense, meets those two criteria. Though the station may be orbiting Earth at a speed several times that of sound, the environment on board is pretty stable.

Getting up there in the first place, not to mention re-entry, may cause some problems - but it's nothing a decent picnic cooler and plenty of padding can't fix.

We are in the golden age of weird food science.

Among the products Suntory is sending is Yamazaki Single Malt Sherry Cask 2013, which was recently given the title of "Best Whisky in the World" in Whisky Bible 2015. The space-aged whisky, it should be noted, will not be commercially available. Suntory will be using the samples to perform experiments, including having their expert tasters compare it to Earth-aged whisky. In short, they want find a "scientific explanation for the mechanism that makes alcohol mellow."

Suntory is also featured in the critically-acclaimed film, Lost in Translation, wherein Bill Murray's character finds himself in Japan to film an ad for the product.

Alcohol is not a common item to have in space. Experiments in the 1970s were done to see what kind of "luxury" meals could be provided for the astronauts working on Skylab, and sherry was very nearly included in the menu. Experiments, however, proved this would not necessarily work out well. Think "motion sickness, plus alcohol, times a thousand."