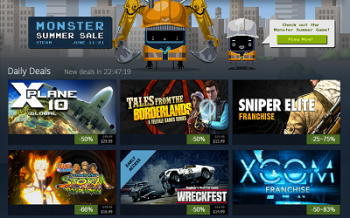 Regional pricing was one of those things that made sense back in the days of physical goods - as companies had to pay extra costs to physically ship things to foreign countries - but in the world of digital downloads it doesn't make a whole lot of sense. The European Commission has also seen the futility of regional pricing on digitally purchased video games, and with its new "Digital Single Market" proposal, aims to end it (at least across its 28 member states).

"The Digital Single Market initiative seeks to provide an unfettered European market for digital goods and services across all its 28 member states," the EC told MCV.

The proposal would mean that publishers must maintain a single price point across all of Europe, and would also not be able to limit services to certain regions.

"Simplified and modern rules for online and digital cross-border purchases will encourage more businesses to sell online across borders and further develop digital markets such as games," the commission added.

Dave Clark, head of marketing at indie games label Kiss, was one of many who supported the proposal, stating that "To suggest to the consumer that the cost of selling a digital product or a physical product sold via a digital outlet can vary from country to country is becoming ever more difficult to justify."

As an Australian, who has felt the sting of regional pricing ever since I started gaming, I only have good things to say about this proposal and really hope similar ones are put in place all over the world.