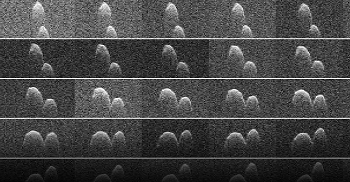 The peanut shaped asteroid known as 1999 JD6 was captured on video by NASA recently, as it swung close by Earth just last week.

Somewhere, in the deeps of space, is a peanut the size of an aircraft carrier with our name on it.

Formally known as 1999-JD6, the "space peanut" was caught on camera by NASA as it passed close by Earth on July 25th. At its closest, it was just 3.5 million miles away.

That may seem like a safe distance to you, but in space, a few million miles is peanuts.

The seemingly strange shape is not an especially unique form for asteroids. NASA scientists say the "lobed" shape often results from collisions - either two smaller, spherical bodies colliding and fusing, or a larger asteroid losing a chunk in a crash.

In all seriousness, the barbell-shaped asteroid and the thousands more just like it in our neighborhood, pose little threat to us. NASA's "Near Earth Objects" project keeps good track of every threateningly large chunk of space rock that might end up on a collision couse with Earth. In the event of a looming disaster, Bruce Willis will be immediately fired into space, and there are also several plans in place to actually keep us safe.