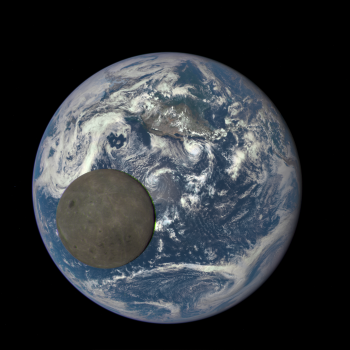 An unintentional benefit of NASA's DSCOVR satellite has been the amazing photos of Earth it has taken, but this time the moon wanted some attention, too.

Ground squirrels. Carnivorous seals. Creepy, staring children. And now a new contender for the photobomb to end all photobombs: the moon. O hai there!

NASA's DSCOVR satellite has already returned some epic views of our home planet in its scant few weeks since first activating. Looks like the moon didn't like its big sibling getting all the attention.

The photo is actually more than just peculiar - it literally sheds light on something many humans have never seen before: the dark side of the moon. Most Apollo mission astronauts have seen it before landing, and the USSR took a photo before that, but to most of us back here on Earth the moon is not showing its familiar face.

Our moon is tidally locked, which means its spin is in (almost) perfect sync with its orbit. We only ever get to see one side of the satellite when we look up at night.

The far side of celestial objects can tell us a lot.

You weren't missing much, according to some astronauts. "The back side looks like a sand pile my kids have played in for some time. It's all beat up, no definition, just a lot of bumps and holes," said Apollo 8's William Anders.

He's probably right. I'd rather get a close-up of the space peanut.