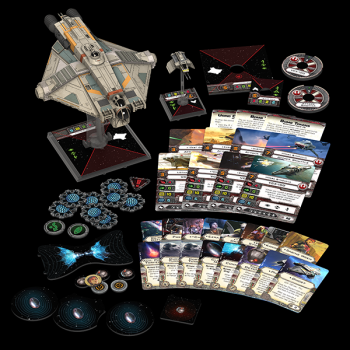 Fantasy Flight Games is among a handful publishers keeping the classic Star Wars expanded universe alive right now - this year's IG-2000 X-Wing expansion being a great example. But that doesn't mean there isn't room to explore the wonderful ships and characters the New EU is producing. As part of the X-Wing Miniatures Game's eight wave of starship expansions, Fantasy Flight has unveiled Ghost and the Inquisitor's TIE Fighter - two iconic ships featured in the fantastic Star Wars: Rebels television series.

The Ghost expansion pack marks Fantasy Flight's first definitive push into New EU content, and it looks very promising. Along with the Ghost itself, fans will also get the Phantom attack shuttle featured on Rebels. Players can either launch or dock the Phantom alongside the Ghost, or take it into battle with a Rebel squad. The expansion pack also includes pilot cards for Rebels heroes Hera, Ezra, and Kanan among others.

But Ghost isn't the only ship appearing from Rebels - the Inqusitor's TIE Fighter is making a dramatic appearance. This TIE Advanced prototype uses faster engines, folding s-foils, and a tracking missile launcher for combating your enemies. Players will get five new ship cards, including one for the Inquisitor himself, and all necessary tokens to add this ship to the game.

Fantasy Flight's announcement also digs into the classic EU for ships like the Mist Hunter, a starfighter piloted by the bounty hunter Zuckuss and his droid partner. The Scum and Villany faction also gets its first large-base turret ship with the Punishing One expansion, for anyone who prefers to win through blunt force. Whatever ship you choose, they all still seem to follow Fantasy Flight's usual attention to detail and quality, so you'll likely fare well with any addon. But I suspect Rebels ships like Ghost are the real highlight - and leave me wondering what Episode VII ships might be on the way.