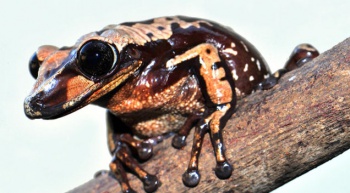 It has been discovered that a Brazilian species is the world's first venomous frog. The man who made this discovery probably wishes he didn't.

At least, that's how I like to imagine the discovery of the world's first venomous frog went down.

Carlos Jared, a researcher from Brazil's Instituto Butantan in São Paulo, was collecting frogs in a forest reserve when one of them head-butted him, stabbing its venom-coated spine into his hand. It caused "intense pain radiating up the arm," said Jared, "lasting about five hours."

This tipped Jared and his co-researchers off that there was something strange about Greening's Frog, or Corythomantis greeningi, a species which has been known to science for some time. It turns out that Greening's and a related species, Bruno's Casque-Headed, are the only frogs discovered so far that inject venom into predators to ward them off.

What do you think? Does this beat out other newly discovered, real-life Pokemon?

Many tropical frogs are known to coat their bodies with a poisonous substance and bright colors, signalling to potential predators, "buddy, don't even try to eat me."

This is distinct from how a venomous frog delivers its toxin, though. Fun fact of the day: the difference between poisonous and venomous animals is that venom is injected by an animal into its prey or predator (as in the bullet ant covered recently), whereas a poisonous animal secretes (or borrows) poison to prevent predation. Poison, like a good joke, is all in the delivery.

Non-Player Counselor: Ash Will Never Catch Them All Firefilm 12 Comments
Comments on