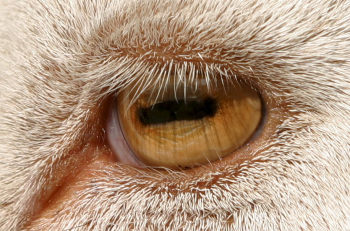 New research from the University of Berkeley hopes to finally illuminate why different animals develop a variety of eye shapes. The answer appears to do with whether an animal is prey or a predator, but the study has come under criticism.

What is it that makes a house cat's eyes into threatening, vertical slits, makes a human's pupils circular, and turns a goat's into soulless monster orbs? Scientists from the University of Berkeley in California may have figured it all out.

It turns out that pupil shape has a lot to do with where you land on the food chain.

Goats' eyes, which contain horizontal, rectangular pupils, are extremely adapted for peripheral vision. In other words, they are very good at keeping an eye out for predators, and the same is true for numerous other herbivorous ungulates, such as horses and deer.

Goats actually have about 320-degree vision, thanks to their cautious eyes. Humans, for comparison, have 120 degrees of vision.

Vertical slits are uniquely good at depth perception, or for determining precise distance to a target. Unsurprisingly, these types of eyes are found in ambushing predators, such as house cats and alligators. Taller predators, such as lions or human beings, tend to have circle-shaped pupils, which are not really specialized - the theory is that these animals's height grants the same advantage a vertical pupil would.

The New York Times set up a gallery of various animal eyes, to give you an idea of what to look for:

One of the most surprising facts revealed by the study is in how the horizontal-eyed animals maintain their peripheral vision, when they typically have to angle their heads to chew on grass.

"When they pitch their head down, their eyes rotate in the head to maintain parallelism with the ground," says Martin Banks, a vision scientists with the university. "And that's kind of remarkable, because the eyes have to spin in opposite directions in the head."

The crazy thing is that nobody had ever noticed this behavior before - at least, it did not appear in any paper the scientists went through.

It seems that the researchers aren't seeing eye to eye with their peers, however. The study is far from perfect, say critics; chinchillas, to name one example, are a grazing animal with vertical slits.

All this does nothing to quash my totally rational fear of goat eyes. Am I alone in this? I could barely watch The Muppet Show!