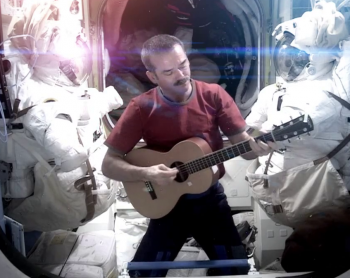 Having achieved astronomical success with his in-orbit cover of David Bowie's 'Space Oddity,' Chris Hadfield prepares to release an entire album of songs recorded in space.

It was, perhaps, only a matter of time. Chris Hadfield, former commander of the International Space Station, is about to release his debut solo album full of music recorded in orbit.

Have a listen to an original track below:

For the astronaut, musician, Canadian and popular space hype man, 'Space Sessions: Songs From a Tin Can' was just an extension of his mission.

"To me, this is a continuation of my best efforts to share the experience, to the best of my ability," Hadfield told the Globe and Mail. "I am just as delighted with this as I am with any photograph I took or any other verbal description I've ever had of that magnificent experience."

Hadfield spent 166 days on board the space station, and recorded songs in his free time. The best place to record was in his sleep pod, with a microphone attached to his iPad. He had just his Larrivee Parlor acoustic guitar; studio musicians were brought in down on Earth to back him up on for the album.

It isn't easy being a rock star out there. "There's no gravity to pull the fluid out of your head... so you always have a full head and swollen tongue and vocal cords."

"Almost always, the guitar slips in your hands. If you're a guitar player, I tell people to try playing while standing on your head."

Just before his departure from the space station, Chris recorded a cover of David Bowie's 'Space Oddity,' with permission from the prolific rocker. The video was to be taken down a year from when it went up, but apparently a deal was struck - not only does the video remain on Youtube, but Hadfield's version will be the centerpiece to the record.