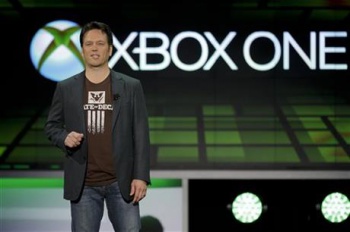 In a Gamescon interview with Eurogamer, Phil Spencer discussed the PS4, Wii U, and Xbox's focus moving forward.

Console wars have certainly become more gentlemanly in recent years, and in an interview with Eurogamer Head of Xbox Phil Spencer proved it when he praised both Sony and Nintendo.

"Sony's had great success with PlayStation, they've earned that success over multiple decades of building a great product. Kudos to them for their market position," Spencer said. He also had some kind words for the Wii U, calling Nintendo a "beacon" for first party titles. "On the Wii U, I think people downplay how many units they've sold. I've got a Wii U, I think there's some great games on there. I think Splatoon's a really nice game and I don't think there's a first-party out there that has the strength of IP that Nintendo has. They're always a beacon to me when I look at what it means to build a first-party portfolio of products, they've done a great job."

Despite offering plenty of praise for his competitors, Spencer asserted that his focus, and the focus of the company in general, would not be on their competitors but rather the Xbox One and, most importantly, gamers.

"I see nothing but opportunity in front of us. The console space is so healthy right now - and that's also not a terminal point you can write about anymore, the death of the console! - it's nice to see Sony doing well, PlayStation 4 and Xbox is selling more than we've ever sold before. That health is great. I really think about us coming, more about putting the gamer at the centre of our decisions over the next 12 months, and less centred on specific ties to any platform that those people want to play on. It's such a huge opportunity. We have a unique position being both the Windows company and the Xbox company, that allows us to go do more."

This is a welcome change of perspective from June 2013, when Microsoft's then-President of Interactive Entertainment Business Don Mattrick responded to concerns regarding the Xbox One's internet connectivity requirements by saying "We have a product for people who aren't able to get some form of connectivity; it's called Xbox 360."