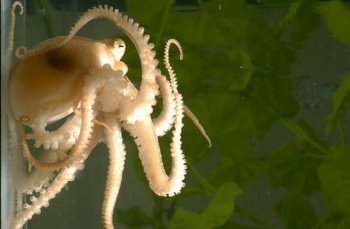 The octopus' genome has been fully sequenced by a team based at the University of Chicago, and the discoveries therein are blowing people's minds.

It's common knowledge now that octopuses - or octopi, or octopodes, if you prefer - are incredibly strange and intelligent animals. They can unscrew themselves from inside jars; use cocount shells to build little mobile homes. But how did they get so smart - and do they think at all like us?

Researchers from the University of Chicago have just sequenced the genome (published in Nature) of the eight-armed mollusc, and the findings so far have been providing both answers and questions.

At first, the octopus' genes appeared to have a lot in common with its mollusc relatives, such as snails and clams. One stark area of differentiation, however, was in the expansion of a group of genes associated with brain development, and once thought to be utterly unique to vertebrates.

To put that another way: octopuses are very, very far removed from us on the tree of life - and yet the genes that control their brain development have more in common with similar genes in reptiles, birds, or humans than they do with those of other invertebrates.

This is likely a case of convergent evolution - when two similar adaptations appear despite a a chasm of genetic difference. Wings in birds and insects make one example; the eye, too, was independently developed several dozen times throughout evolution.

Among other fun discoveries made was the part of the octopus genome that controls its translucent skin and adaptive coloration - that's where the animal can quickly change its skin color to blend in with surroundings or, some say, to communicate with others of its species.

Man, octopuses are going to take over the world some day. Do you think that, when they do, they'll remake Oldboy and have a scene at the beginning where a starved octopus chows down on a living human being?