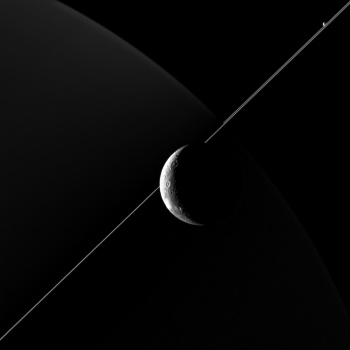 NASA's Cassini spacecraft is to start sending back its last photos of Dione, a moon of Saturn, before the probe begins its last, dangerous mission.

The Cassini-Huygens mission is preparing to reach its dramatic conclusion, but first it has some photos it would like to share - and who doesn't love space photos?

The probe, launched in 1997, passed by Jupiter before settling into orbit around Saturn in 2004. In 2005, the Huygens lander detached and landed on Titan. Since its arrival at the gas giant and second-biggest planet in our solar system, Cassini has been photographing its strange moons and the planet itself.

Below is a gallery of some of Cassini's most interesting recent photos, including its recent flybys of the moons Dione and Hyperion (all images are courtesy of NASA):

Visible in the gallery, in order: an infrared shot of Saturn; Dione (left) and Mimas (right) passing before the gas giant; Dione crossing the famous rings; a close-up of Dione; a further close-up, displaying its mysterious chasms; a false-color photo of the moon, Hyperion.

For more of Cassini's pics, check out our earlier article here.

It has one more flyby of Dione planned on August 17th, and then it will shift its orbit as part of a year-long preparation for its last mission: to dive between Saturn and its rings, collecting data, before finally penetrating the planet's atmosphere where it will presumably be destroyed.

We'll probably have more photos from the probe by next week; and after that, we'll just have to wait patiently to hear about the annoyed Saturnian aliens complaining that we're dumping all our junk on their planet.