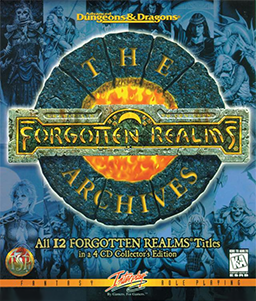 GOG and Wizards of the Coast have teamed up to re-release a whole slew of classic Dungeons & Dragons games.

As The Escapist has demonstrated in the past, the history of Dungeons & Dragons in video games is one that's long, storied and, perhaps above all else, impressive. Pretty much since the moment video games became a thing there have been people trying to adapt D&D into an electronic experience. Sadly, due to the advancement of time and technology, many of the earliest games to come out of those efforts have been almost impossible for modern gamers to enjoy. Now however, thanks to GOG, gamers interested in dipping their toes into D&D's video game past will find the process much easier.

Beginning today, GOG, in association with Wizards of the Coast, will be adding Forgotten Realms: The Archives to its digital library. A trio of D&D RPG collections, The Archives will include an impressive range of games including Eye of the Beholder I-III (Archives: Collection One), SSI's Pool of Radiance Gold Box games (Archives: Collection Two), Dungeon Hack, Menzoberranzan (Archives: Collection Three) and more. Speaking to The Escapist about the announcement, Wizards of the Coast communications manager Greg Tito expressed excitement about the opportunity this re-release represents. "It feels great to be able to play games like Pool of Radiance and Eye of the Beholder," he said. "I didn't play these games when I was a kid even though I vividly remember seeing them on game store shelves... I always thought I would get to them someday but that sadly became less of a reality as the years wore on. Now here we are, almost 25 years later, and I can jump into the early Forgotten Realms once again. It's wonderful."

Today's release will represent the first time that any of these titles have been available as digital products. Gamers interested in purchasing them, in turn, will be able to pick up Collection One and Collection Two for $9.99 each. Collection Three will only cost $5.99. To help celebrate the release, GOG has also announced a special sale on its catalog of D&D titles, complete with discounts up to 80 percent. The sale will run until Tuesday, August 25th.

To see the full roster of new D&D games, head over to GOG.