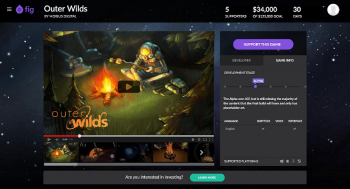 Some of Kickstarter's most successful veterans have teamed up to launch an alternative to the crowdfunding site that will offer rewards-based crowdfunding and equity investing.

Former COO at Double Fine Justin Bailey has launched Fig, a new crowdfunding site focused exclusively on games, that allows accredited investors with net worths over $1 million to invest at least $1,000 in exchange for an equity share in the game. The site launched today with a campaign for space exploration game Outer Wilds. Bailey teamed up with former Double Fine colleague Tim Schafer, inXile's Brian Fargo, and Obsidian's Feargus Urquhart, all of whom have pledged to launch new video game campaigns on Fig.

"When Justin came and talked to us about the equity side of things, we thought that could change things so much from the standpoint of what we could get funded and how we could get funded," Urquhart said in an interview. "Instead of add-ons and stretch goals and all these things being this very ad hoc thing we have to do, it really makes it so that we can run our campaigns in a way that's the way video game campaigns have been run on the different crowdfunding sites."

Those launching projects have the option not to participate in the equity investment program, and Urquhart stated that everyone will understand what part is crowdfunding and what part is investment funding. It was important to them to offer that flexibility. It was also important for them to create a site focused on video games. Fig was designed as a way to assist game development companies during and after the campaign, ditching the one size fits all approach that many other sites use.

"Other crowdfunding sites are horizontal. They serve many industries. Anything you do has to work for taxidermy just as much as it works for video games. If you look at a lot of crowdfunding, it's about building a finished product. The campaign goal is set at the minimum amount of orders needed to make that product," Bailey said. "Games are completely different. The people involved are financing the development of that game. It's much more specific. A lot of times, with these high-profile games like Feargus and Brian and Tim make, the stakes are high. Multiple millions are coming in."

"If we want to make bigger stuff, if we want to involve people even more in what we're doing, this takes crowdfunding to a point where people can fund $50,000 games, or $2 million games, or $5 million games," Urquhart added. "Hopefully we can even get to $10 million and $15 million games. That's great for the independent game development scene, allowing that. That's what the difference is. It's about why we want to do it."

"We're curated. We're specific to games. We're a vertical approach, so our involvement doesn't just stop once the campaign is done," Bailey said. "A lot of the stuff we have is value-add stuff. Things like continued mentoring that's going on. But when the game launches we're going to help promote it to make sure it sells more."