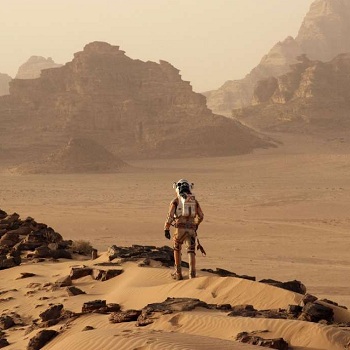 The full-length trailer for Ridley Scott's The Martian has everything a Sci-Fi fan could ever want: The Red Planet, Marooned astronauts, and...Kristen Wiig?!

If you threw Apollo 13, Moon, Interstellar, and a couple gallons of Bane's Venom serum into a blender, you'd have something close to the trailer for Ridley Scott's latest space epic, The Martian, which dropped yesterday.

Based upon Andy Weir's hugely popular novel of the same name and starring Matt Damon as an astronaut stranded on Mars, The Martian has already received an official endorsement from NASA (whose director of planetary sciences, Jim Green, was brought on as a consultant for the film) and rave reviews from those lucky enough to have caught the first 49 minutes of the picture at a recent screening.

So if you're into seeing Will Hunting "science the shit out of" his shipwrecked space station, another space crew (led by Jessica Chastain) committing a mutiny to save him, or Kristen Wiig looking on anxiously from mission control, check out the trailer for The Martian and let us know what you think.