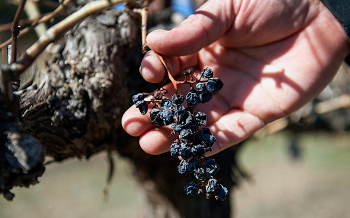 A study published on Monday thoroughly connects human-caused climate change to the worsening and frequency of droughts worldwide, and in particular California's years-long dry spell.

California's current drought is a disaster; having begun in 2012, it is a record-breaker in terms of severity. Droughts around the world have become increasingly devastating, and scientists now say - and have been saying, for several decades - that human emissions are responsible.

One of the most recent voices in the scientific, political, and even papal choir is A. Park Williams at Columbia University. He and his team have just published a study that takes one of the most in-depth looks at droughts ever, with particular focus on California's.

"But it's definitely made worse by global warming."

This seems like common sense, of course, but it doesn't hurt to have the data and the research to back it up. Rising temperatures cause moisture to evaporate from soil and reservoirs faster; warm air can contain more water vapor. The result is that no matter how much rain or snow an area gets, the atmosphere will pull it away quickly.

California already wasn't getting enough precipitation, so how can we tell how exactly much worse it is due to changing climate? According to his models, Dr. Williams says that the two degrees Fahrenheit difference between California today and the end of the 19th century leads to the evaporation of as much as 8.5 trillion gallons of water. A concurrent paper, from the University of California, Davis, suggests this year alone is going to cost the state about 2.7 billion dollars, and the livelihoods of hundreds of thousands. Williams' group says human emissions are responsible for up to 27% of that.

Two degrees Fahrenheit may seem paltry, but it is clearly having a dramatic effect. "Just from the temperature change, we're in a new climate," says Dr. Williams.

My current favorite settings may be post-apocalyptic wastelands, but that doesn't mean I want to live in one. If anyone has any information to add, just say so in the comments - and keep it civil!