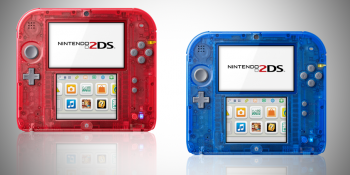 The entry barrier for 3DS gaming just got a whole lot cheaper.

Today, Nintendo announced that its already super-cheap Nintendo 2DS is going to be getting even cheaper. On August 30, the RRP of the handheld will drop to just $100, and if that's not enough, every unit sold will come with a free downloadable copy of Mario Kart 7. This drops the entry barrier for 3DS gaming significantly, so anyone who has been wanting to jump on the 3DS bandwagon, or just wants a cheap distraction for their kids, now is the time.

The price drop comes almost two years after the handheld's launch in the US. Coming in at $130, $50 less than the $170 3DS, the 2DS's cheap price came with a few downsides. As the name would suggest, the 3DS's signature stereoscopic 3D was cut from the 2DS, as well as the clamshell folding design that gamers have been familiar with since the original DS.

Still, if you want to enjoy hits like Pokemon X and Y, Mario Kart 7 and Legend of Zelda: Ocarina of Time, which don't make particularly strong use of the 3D feature anyway, it's a must-buy.

You may recall that the original 3DS dropped from $250 to $170 just five months after its launch in 2011, when it failed to meet sales expectations. This price drop isn't as sudden, and is more of an indication of Nintendo wanting to promote the system as a cheap handheld for kids for the upcoming holiday system.