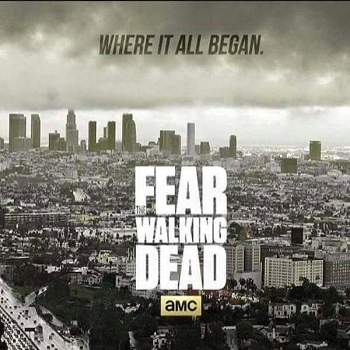 With AMC's Fear the Walking Dead receiving mixed (at best) reviews ahead of it's premiere tonight, it may just be time to admit that the zombie needs to be put down for good.

Fast zombies. Rage-infected zombies. Nazi zombies. Bath salt zombies, rape zombies (?!), alien zombies, romantic zombies, and zombie goddamn beavers. Mere hours away from the premiere of AMC's *second* zombie series, Fear the Walking Dead, it's safe to say that we have reached peak fascination (or fatigue, depending on where you stand) with the members of the undead. Like the viruses often depicted in these countless incarnations of zombie lore, our obsession with post-apocalyptic culture has spread to a critical, uncontainable level, and one that simply won't die no matter how many times we put it down.

Now, I should come clean. I am and have always been a complete zombie shill. I've seen damn-near every type of zombie flick I mentioned above (excluding the rape zombies, because why?). I've partaken in a Zombie Run. I've written, directed, and acted in a multitude of low-budget zombie fare, and have fearlessly stuck by the original Walking Dead series despite the fact that it hasn't had a consistently good top-to-bottom season since the Darabont days. But even the most diehard fan of zeds must admit that the horse has been beaten to death and beyond by this point.

Look no further than the existence of AMC's upcoming series, Fear the Walking Dead -- which describes itself as "a gritty drama that explores the onset of the undead apocalypse through the lens of a fractured family" -- to confirm this notion. On a network that only holds nine original programs to its credit, three of them are centered around the zombie apocalypse. Three. And let us not forget that one of those three zombie programs is immediately followed by a zombie program that spends an hour discussing what just happened on the previous zombie program. That is absolute insanity -- like following up Mad Men with a show devoted entirely to Bob, or a Breaking Bad spinoff all about the lawyer! I kid, but at least AMC had the common decency to wait for one Vince Gilligan series to end before moving ahead with another (which had an excellent first season, FWIW).

In an effort to give us more of what we (apparently) want, AMC is risking watering down the already watered down product that is The Walking Dead. The network has already ordered a 16-episode second season of Fear to follow the 6-episode first season, which means that by this time next year, we'll be looking at 30+ weeks of zombie mayhem on our television screens. It's an ambitious prospect to say the least, especially when you consider that the show upon which Fear is based has been repeatedly criticized for either front or back-loading entire seasons and meandering aimlessly in between because, simply put, there isn't enough story to tell (or the current team of writers behind The Walking Dead simply don't know how to tell it). "Something More" indeed, eh AMC?.

Of course, whilst The Walking Dead continues to dominate Sunday night ratings -- often competing with and triumphing over Sunday Night Football in key demographics, as crazy as that sounds -- it's entirely possible that Fear will tank. Early reviews for the spinoff have been somewhat less than welcoming, to put it lightly:
-- Hitflix described the pilot as "uneven in execution, with the prequel nature of it hurting as much as helping."

-- Vanity Fair fears (no pun intended) that it will only be a matter of time before Fear simply becomes "The Walking Dead L.A."

-- The A.V. Club thinks the pilot "spends too much time on the kind of blah melodrama" and "sacrificing a lot of the resonances that a prequel promises" (while ultimately noting the potential for the show to become something great).

If the first few minutes of Fear -- which were released online earlier this week-- are any indication, it looks like we might be in for a bit more of the same, which fans of the original incarnation will almost certainly be pleased to find out.

(I don't think Gloria is doing well, you guys.)

And it's not just AMC that's churning out zombie media at an indigestible rate. According to IMDB, there have been at least 133 major and independent zombie films released in the past two years, and that's only their top picks!

What's the latest spin on the zombie genre to receive the big budget treatment, you ask? Why, that would be Boy Scouts vs. Zombies, of course. Check out the trailer for Boy Scout's Guide to the Zombie Apocalypse, which also premiered earlier this week and opens nationwide on October 30th. (Warning: NSFW)

While not nearly as lazy as anything Michael Bay or Adam Sandler have been jamming down moviegoers throats these days, it's hard to imagine that Zombieland+ MacGyver (as Filmdrunk's Vince Mancini best put it) will really be the entry that completely redeems all the unnecessary recent entries in the zombie cannon. (Zombieland+ MacGruber, on the other hand...)

All that said, I will almost certainly be tuning in for the premiere of Fear this Sunday, as I'm sure many of you will. But when looking back at just how much artistic landscape has been devoted to our undead friends in recent years, does anyone else think it's about time (or long-past the time) we moved on to something else? Mummies, maybe? Frankensteins? And before you even suggest it, no, I am not saying that we need more vampires in our lives. Seriously, screw you, Vampire Diaries.

Whatever meaning or metaphor that could be drawn from the George A. Romero classics of old has long since lost relevance, or at least, it's already been analyzed and discussed ad nauseum. Fear the Walking Dead may very well be another smash hit for AMC, it could just as easily be the straw that breaks the camel's back...then brings the camel back from to life before putting a bullet in its head.