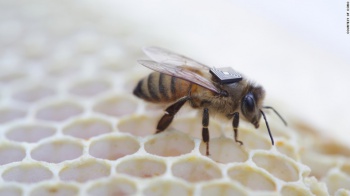 Populations of honey bees are declining rapidly worldwide, but scientists from Australia are hoping their new bee backpack will give them the information necessary to save the little pollinators.

You've seen the headlines - "Honey bees are disappearing and scientists don't know why;" "how will we survive if the bees die out;" "is it possible to make honey bees even more adorable?"

Australian researchers are hoping to solve a number of problems at once with their "bee backpack," a microchip that gets strapped to the little insect's back. It will collect data about the pollinator's movements and collect data about how these animals deal with stress in their environments.

It seems a little bit more invasive than the Snotbot (Kickstarter ends in just a few hours! Don't make Patrick Stewart sad!), but the scientists involved are taking every precaution not to harm the bees they are working with.

"The tiny technology allows researchers to analyse the effects of stress factors including disease, pesticides, air pollution, water contamination, diet and extreme weather on the movements of bees and their ability to pollinate," says Paulo de Souza, the Commonwealth Scientific and Industrial Research Organisation's science leader.

A possible bee extinction seems closer than ever. Parasites, disease, climate upheaval, and possibly even interference from man-made objects such as cell phone towers and fungicides, are all having negative effects. If bees bite the dust, we might be close behind - honey bees are the world's top pollinators, especially when it comes to human-edible fruit and vegetables.

But really, this is just about how friggin' cute that widdle microchip is!