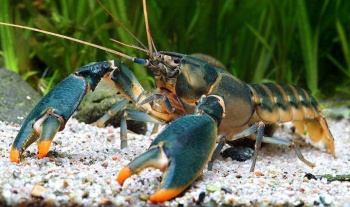 Scientists have announced today the formal name for a newly discovered species of crayfish: Cherax snowden, after the American whistleblower.

German researcher Christian Lukhaup and his colleagues have discovered Snowden hiding in an Indonesian river, they announced earlier today.

Snowden had previously been misidentified as a similar species of crayfish, but new findings confirm that Snowden is, indeed, a new animal altogether. Snowden has previously been exported to countries such as the United States as a colorful pet, often under the name "orange-tip."

In all seriousness, the new species of Indonesian crayfish (a close neighbor to today's other featured animal) is, indeed, named for the famous (or infamous, if you are so inclined) American hacker, Edward Snowden. The researchers are quite clear about where the name for Cherax snowden comes from:

"The new species is named after the American freedom fighter Edward Joseph Snowden," goes the study. "He is honored due to his extraordinary achievements in defense of justice, and freedom."

It is unknown at press time if the crayfish in question has released any classified documents, let alone possess advanced hacking skills. The claws are probably holding it back.