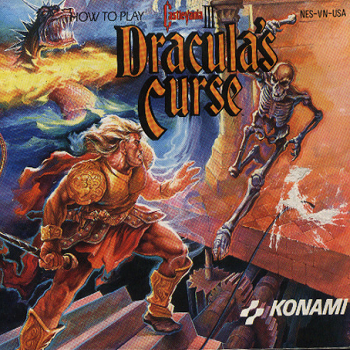 After months of circulating rumors, it looks like a mini-series based on the classic Konami game is coming to the small screen.

Konami's Castlevania series has long been lauded as one of the greatest video game franchises of all time, and as such, is often brought up in discussions of a potential film/TV adaptation. The platform game originally released on the FDS in 1986 (but later on both the NES and Playstation) centered around a vampire-hunting clan known as the Belmonts, and was at one time set to receive the blockbuster treatment, with Resident Evil and Mortal Kombat director Paul W.S. Anderson at the helm and Rogue Pictures backing the project. However, everything from the writer's strike of 2007 to the sale of Rogue Pictures to Relativity Media repeatedly delayed, then flat out left the adaptation dead in the water.

That's right, a Castlevania mini-series is currently in the works, and better yet, it's going to be "super-violent, anime series" in the vein of Akira and Young Justice to boot. The news comes via noted producer/video game enthusiast/Chris Angel stunt double Adi Shankar, who posted the following on his official Facebook account late last night.

You might know Shankar as the man behind such works as Judge Dredd: Superfiend and the gritty and totally badass Power/Rangers reboot that made waves across the Interwebs earlier this year. In addition to his short film projects, Shankar also served as the producer on the 2012 remake of Dredd and the Liam-Neeson-Fighting-Wolves vehicle, The Grey.

In a follow-up interview with Collider, Shankar additionally stated that he has enlisted the independent animation studio Frederator (Fairly Oddparents, Adventure Time), who first aquired the rights a few years ago, to bring Castlevania to life. If you're wondering which entry in the saga will serve as the main influence to the story, Shankar also confirmed that it will be Castlevania III: Dracula's Curse.

So prepare yourselves, Escapees (is that what you call yourselves?), because this is gonna be epic.